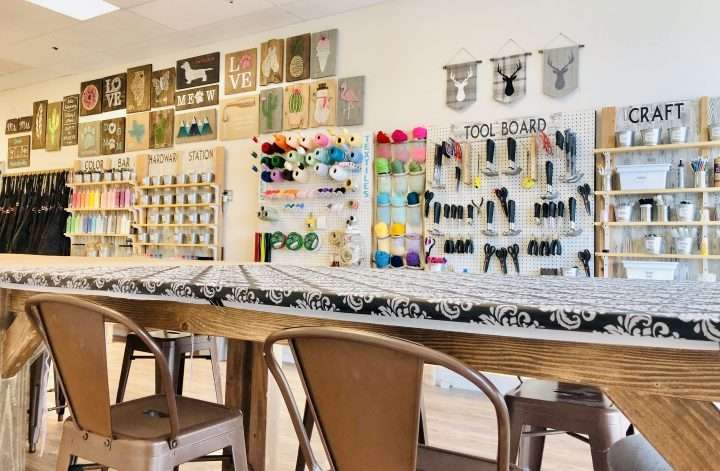 Don’t you love it when someone walks into your home, compliments a particular item, asks where you got it and your response is….”I made it.”  I KNOW, ME TOO!!  We are like two peas in a pod, me and you.

So here’s a quick little fun fact sheet about me:

Favorite Food Donuts, specifically sprinkle donuts.  Clearly donuts are an important part of my life, seeing as they were the first fact that came to mind when I started thinking about this list.

Married  To a brilliantly nerdy scientist who thinks I am only a little crazy for keeping almost everything he tries to put into the garbage can with the thought….”I might be able to use that someday to make something….”

Kids I am a step-mom to 3 great kids: Ragnar, Roark and Taylor and I have 1 fur baby: Napoleon.

Home While I currently live in the sunny southwest (Scottsdale, AZ), my heart will always be in Chicago where I lived until the age of 22.

Favorite Quote  Don’t cry because it’s over, smile because it happened.

And here’s a lil bit more about me…

I have always been an analytical person by nature so it makes sense that I spent 15 years of my life in the scientific field, culminating in the sale of a Forensic DNA Testing Lab I started with my husband in 2004 and sold in 2012.  I continued to oversee operations at the lab until 2014 when I decided to switch careers. If you’re interested, check out this short video featuring me and some of my staff at our DNA Testing lab.

In addition to my scientific side, I have always been a creative person as well. I wanted a chance to flex those creative muscles so after I left the lab, I spent a year and a half studying interior design at the New York Institute of Art and Design.  While going to school, I spent every extra minute I had on DIY projects.  I did everything from re-tiling fireplaces to making a giant 5 foot scrabble board.  In July 2016, I graduated from school with a certification in interior design and decided to open Stencil in order to teach others how they too can create beautiful designs for their home and lifestyle.

Stencil opened in November of 2017 with one idea in mind: give people a place to go to create whatever they wanted. While there were art studios where you could paint a canvas or make pottery, there wasn’t a place where you could go to create…well…everything else. I wanted people to be able to build things. With their hands. To have a sense of accomplishment and learn a new skill all while having fun at the same time.

For two and a half years, we offered over 100 craft projects in a great studio to host awesome DIY craft parties for birthdays, baby showers, bridal showers, bachelorette parties, girls night out and team building events. In May of 2020 our lease was set to expire and while we originally planned to renew our lease, with the uncertainty surrounding COVID, I felt it was safer not to. So we closed our physical studio and switched our business model to focus on DIY@Home Craft Kits and Mobile Craft Events.

In May of 2021, I decided to make a temporary move back to Chicago where I grew up. After spending 1 year in Chicago, I returned to Arizona to re-open my craft studio. It took several months to find the right location but I am happy to report that we re-opened in August of 2022 and we can’t wait to see all your smiling faces again!